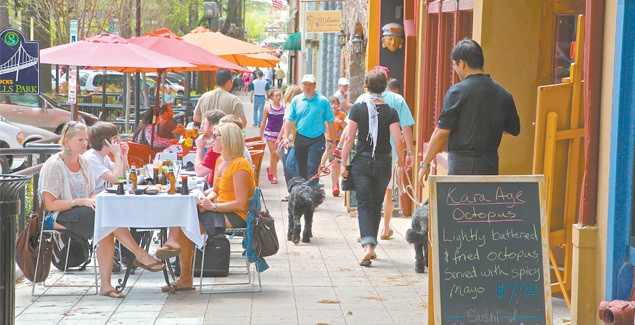 Jill Kesler McCollum remembers a woman who dropped by her office to ask about how to open her own store—filled with angels. A cancer survivor with long white hair, the would-be client of the Small Business Development Center wanted to see if her entrepreneurial spirit could fly.

“Not the cherub kind, we’re talking beautiful angels,” says McCollum, Director of the Greenville Area SBDC at the University Center of Greenville.

The two worked hard on a detailed business plan—a key service the Clemson Region office, one of four in the state, provides for free. Once the blueprint and its realistic financial projections are completed, the client goes to a U.S. Small Business Administration lender, to family and friends, to any source willing and able to help her make the leap from creativity to commerce.

Companies with fewer than 500 employees accounted for 99.7 percent of America’s 5.6 million “employer firms” in 2016, while producing nearly half of the U.S. GDP, according to the Small Business & Entrepreneurship Council.

“She had the prettiest store,” McCollum recalls of the woman who successfully opened her boutique in Anderson in the late ’90s—with $50,000 from her husband, rather than through an SBA or conventional bank loan. “He was her angel investor.”

Still, McCollum, who has been with the SBDC for 26 years, says she “really put her through the wringer” in the business-plan process. Retail and restaurants are notoriously risky bets for lenders—“Restaurants fail at higher rates than funeral homes,” she says, while SBA statistics show that half of all small businesses fail within the first five years.

“If they haven’t gone through us,” McCollum says of wannabe impresarios, “then they’re probably skipping some steps. If we can prevent them from failing, we’ve done just as good as helping them from failing right off the bat.”

So what does it take to secure sufficient capital that not only will help you become your own boss but increase your chances of staying open?

“There’s always money available for a high-character person that’s got some wherewithal and a solid business plan,” says Paul Pickhardt, Senior Vice President, SBA Lending Manager, at Countybank, whose dedicated office is on track to close $25 million worth of SBA-backed loans this year.

While the federal agency doesn’t actually write checks but guarantees loans for the banks that do, the state in 2018 saw 185 SBA-backed loans totaling $72.4 million, creating nearly 1,500 jobs in the Upstate alone, according to the SBA’s South Carolina District Office.

With a median 2018 loan of $100,000, the SBA in the last five years guaranteed more than a quarter-of-million dollars to more than 500 small Upstate businesses that created more than 5,000 jobs, figures show.

Further echoing Pickhardt and McCollum, she says the borrower must show “industry research, market research and the most important part, financials.”

Even still, Pickhardt says, “It’s not easy to get an SBA loan.”

Small-business lenders are especially wary of start-ups. Those generally go to venture capitalists or so-called “angel investors,” best known for providing equity financing to such “early-stage” innovators as tech, biomed, healthcare and manufacturers.

Lenders also prefer those who come to the table with their own capital or collateral.

“No lender is going to give you 100 percent of the money you need,” Pickhardt says. “You have to have cash to put in, skin in the game. Every bank has a different lending credit box, and if you fit in the box and you’re a high-character person, there’s money out there for people who have a good business plan and have experience—hopefully in their industry.”

So whatever happened to McCollum’s heavenly client?

“That was so sad,” McCollum says. Not because the business failed—the store closed when the entrepreneur’s husband, a pharmacist, got transferred out of state.

“Oh, yeah, people were really upset, I mean, the whole community, because she really had something going for about a year and a half. Maybe it was her personality, she was the angel.”